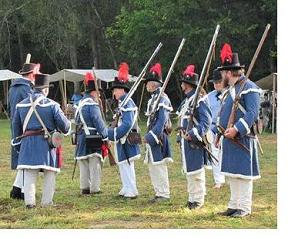 In November 1814, about 215 Middle Tennesseans under the command of Colonel John Cocke, former Montgomery County sheriff, boarded flat-bottom boats for a treacherous journey down the Cumberland, Ohio and Mississippi Rivers to join Major General Andrew Jackson’s 7th US Infantry Regiment in New Orleans.

This November, Clarksvillians will again gather to send Volunteer Reenactors to fight with Jackson in commemoration of the 200th anniversary of this famous battle.

In addition to troops, guns, powder, and supplies, the Militia soldiers also transported cannonballs cast at Ironmaster Montgomery Bell’s Cumberland Furnace in Dickson County that were used in the Battle of New Orleans on the 8th of January 1815.

Starting at 9:00am on Saturday, November 15, War of 1812 Reenactors from five states will be at McGregor Park to talk with visitors about weapons, uniforms, food and medicine common to the period. Then at 11:00am Clarksville can give them a rousing send-off on the Aux Arc, a 40-foot replica of keelboats that would have taken Tennessee volunteers on the long journey to New Orleans.

Those who have bought tickets for the price of a $20 “Andrew Jackson” can celebrate the successful launch over lunch with fellow Clarksvillian and Tennessee governor from 1809 to 1815 Willie Blount, Rachel and Andrew Jackson, and President James Madison. Tickets are available for purchase by check or cash through the Clarksville-Montgomery County Historical Society and Clarksville-Montgomery County Arts & Heritage Development Council or by credit card via PayPal. (Online reservations carry a $2.00 convenience fee.)