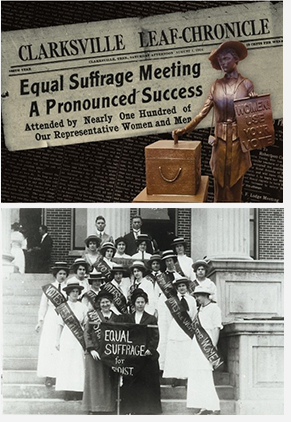 This is your opportunity to participate in the 100th Anniversary of Suffrage. Purchase an inscribed commemorative brick for the Suffrage Walkway to show support or to honor a loved one: www.brickmarkersusa.com/donors/cmh.html.

The 100th anniversary of Suffrage is a celebration of women winning the right to vote. The 19th amendment to the Constitution of United States reads, “The right of citizens of the United States to vote shall not be denied or abridged by the United States or any state on account of sex.”

We are honoring Suffrage and the women who made it possible, with a larger than life bronze statue, placed in Public Square in downtown Clarksville. She will be unveiled on August 15, 2020. She is casting her vote. Her name is Tennessee Triumph.

The battle for the right to vote lasted 72 years. Most of those who began the fight did not live long enough to vote. The last battleground was fought here in Tennessee. Many Montgomery county women participated in the organizing and lobbying efforts that led to the final victory, won in Nashville.

We have researched and found many of their names and they are listed at the base of the statue. These were ordinary citizens who worked together to accomplish something extraordinary.

Tennessee Triumph will be surrounded with a brick walkway. The bricks that will make up the walkway are for sale. Every woman and every man who has a mother, daughter, sister or wife can become a part of this historic event. This is a special opportunity to purchase an inscribed commemorative brick and create a lasting legacy honoring a family member, an organization, a friend or loved one.